It’s braw not to buffer

The television, the telephone, the pedal bicycle, the steam engine, golf, penicillin. There’s an awful lot that us Scots have invented but there’s one thing that we didn’t - broadband.

This explains then, why most broadband is mince. But what if the Scots had invented broadband, surely then it would be a hell of a lot better?

The answer to your question is yes it would - so much better in fact that we’d have to create a brand name that only the Scots would understand, to put the others off the scent and keep it all for ourselves. Keep scrolling to discover why BrawBand makes regular broadband look like an absolute dobber.

Here’s a little secret none of the big broadband providers want to tell you: most fibre broadband connections aren’t really fibre at all. They still rely on dated copper cable to run from the cabinet and into your house.

It’s the copper cable that slows you down, causing buffering and reliability issues when trying to connect multiple devices at the same time.

Gigabit Full Fibre BrawBand is different. The fibre cable runs directly to your house and provides ultrafast speeds, backed by incredible reliability and customer support based right here in Inverness. To put it another way, it’s braw. 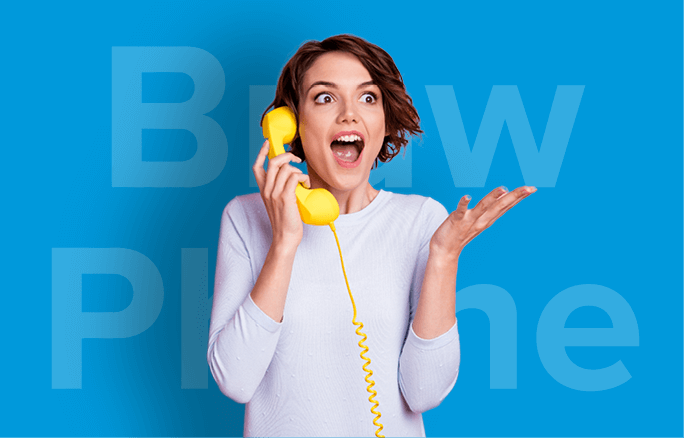 We know our BrawBand customers like a good blether, so that’s why we are delighted to offer our telephone service - BrawPhone.

For £9.95 per month, you can enjoy unlimited calls to UK mobiles and landlines, and if you want, you can add a wireless digital phone handset – but that’s optional.

If you’re an existing customer simply go to the BrawBand portal and add BrawPhone to your package, or if you’re new to us just add BrawPhone when you place your order on the website.

We've already told you - BrawBand is just like broadband, but braw. What else could you possibly want to know?

What is full fibre internet and why is it different?

Most fibre broadband you see advertised is a product called FTTC (Fibre to the Cabinet). With FTTC the fibre cable runs from the local exchange to one of the green cabinets you see sitting on the side of the street. From the cabinet to your house however, the cable is not fibre at all, it’s copper. It’s the copper wire that slows you down, and the further your house is from the nearest cabinet, the slower your connection is likely to be.

It’s a bit like calling a taxi to take you home, only for the driver to stop a mile from your house and give you a piggy back the rest of the way (although admittedly that would be quite fun).

BrawBand is a completely different product, commonly referred to as FTTH (Fibre to the Home) – this means the fibre cable is laid directly to your home, providing vastly improved speeds, reliability and security. To put it simply, BrawBand means no copper!

What kind of speeds can I expect?

Depending on your package you can expect the following speeds:

Follow this Link for more information on what you can expect from your BrawBand speeds and what can influence the results.

What if my postcode isn’t available yet?

We’re working as fast as we can to connect the whole of Inverness. If you go through the sign up process and your postcode isn’t available yet you will be invited to receive an email notification and phone call when your postcode comes on grid.

Do you provide a telephone service?

Yes we do – it’s called BrawPhone.

If you’re a new customer, BrawPhone can be ordered at the point of ordering BrawBand on the website.  If you’re an existing customer looking to add BrawPhone to your package, you can manage this yourself via the BrawBand portal found at my.brawband.co.uk/login (please register if you haven’t already done so) and you will see an option to ‘Add BrawPhone’.

It’s all straightforward. If you want to keep your old number, all you need to do is sign a letter of authority which we will provide you with. We will then schedule the port of the your new number for 2-3 days after your BrawBand service is live. Or, if you require a new number we can provide this to you and have it live on the day of your install.

Once BrawPhone is live simply plug your analogue telephone into the back of the router in the FON port and you will be able to make and receive calls. If you have purchased a Fritz!FON from us this will connect seamlessly to your Fritz!Box router via the DECT button.

BrawPhone costs £9.95 per month and that includes unlimited calls to UK mobiles and landlines. If you want, you can add in a wireless digital phone handset for £75 – but that’s optional.

How secure is a BrawBand connection?

You can be rest assured that your Internet connection is secure, it is underpinned by the HighNet core network which has had upwards of £6 million invested in it to make sure it is secure enough for some of the UK’s largest businesses to send their traffic across.  As well as being underpinned by a business grade network, we also provide a high specification router as standard with every BrawBand installation that comes with advanced security features as standard.

How do I switch to BrawBand from another provider?

Once you have checked on our website that BrawBand is available at your property, you can place your order online via the website. Once your order is placed, we build a fibre optic cable to the outside of your property.

Can I upgrade my package at any time?

You can upgrade your package at any time through the BrawBand website.  This will not affect your minimum contract term and there will be no upgrade fee.

Can I get BrawBand if I’m in a rented property?

Yes, as long as you have the landlord’s permission.  As we will be installing a brand-new fibre cable into the premises and digging up the property/drilling holes you will need to gain the landlords permission before placing an order.

How long after order will my connection go live?

When placing your order online you will be provided with the next available appointment times for your installation and you can select the one most suitable for you.  Remember that you will have to be at home for the installation to be completed.

It’s simple to get up and running with BrawBand – here’s how it works:

We have a team of BrawBuddies who specialise in helping clients with additional support. Please click here to meet our BrawBuddies.

Will I need to be at home during installation?

Ideally the account holder should be there to make sure they are 100% happy with the installation. If this isn’t possible, a responsible adult needs to be present.

Can I use my own router?

With a BrawBand home broadband service you are not able to connect your own router to the BrawBand network.  We do not support routers other than the one we will provide upon installation.

What makes your router better than one I can buy myself?

As we provide all customers with the same router, it allows our support team to better understand any issues you may be experiencing and provide a quicker fix.

We have selected a device with very high spec that we feel will benefit your experience of using your new connection.  It is also capable of handling speeds of up to 1Gbps, which some legacy routers may struggle with.

How do I improve the wireless coverage in my home?

We can supply you with a wireless mesh repeater that works seamlessly with your BrawBand provided router.  This will improve the wireless coverage within your home and enable your connection to go further without the need for additional cables.

The repeater works in conjunction with an app you download to your phone or tablet to help to measure, manage and optimise your wireless connection.  This is the perfect way to get your wifi as braw as your full fibre!

What should I do if I have a support issue during my contract?

Take a look at the support section within your account page as you may find the answer to your query within there.  If you cannot find an appropriate answer then please log a ticket with our support team.

Do you provide TV services?

No, we’re great at ultrafast broadband but TV’s not our bag. What we can assure you is that your current TV streaming services will be supercharged with BrawBand, even when simultaneously streaming from multiple devices.

That’s not Braw, so drop us an email at info@brawband.co.uk and the team will help you out.